Eric Morse is possibly the most prolific runner to not have an overall win at Mt Washington.  He has the Vermont state record for this race with his 1:01:09 from 1999.   He is tied for the third most top 10 finishes with fourteen and is also tied for fourth with ten top five finishes.  He ranks 14th in all-time earnings at Mt Washington taking home $4,200.  He scored on course record setting teams (Central Mass Striders) an amazing nine times, setting course records five times on the open squad and four times on the masters.  He has finished the race sixteen times, including three times as runner-up.

Eric was inducted into athletic Hall of Fame at Harwood High School (Moretown, VT) in 2010 as “one of the most successful athletes in Harwood cross-country and track-and-field history. As a junior, he won four Vermont state championships…as a senior, Eric won two state championships… (and) was a member of the first hockey team at Harwood”.  His most memorable moment at Mt Washington was the “halfway race” of 2002 where he finished in second place, 10 seconds out of the win.  His many accomplishments outside of Mt Washington include being a 7-time member of the USA Mountain running team.  He has quite a range of ability from a sub-4 minute mile to a 1:03 half-marathon.  Eric is a graphic designer residing in Berlin, VT.  In recent years he has excelled at racing with his West Highland Terrier “Murdoch”.  They have won nearly every race they’ve entered and can boast personal bests of 4:59 for the mile and 16:44 for 5km.

Eleonora Mendonca had three consecutive wins from 1976-1978.  She set the course record in 1977 and again in 1978.  She and Hall of Famer Chris Maisto are the only women to have set course records multiple times.  She recalls “I could not pass the opportunity to do a different type of race – only one hill.  I could not forget the incredible view as I approached the summit…The beauty carried me on”.  She was inducted into the Cambridge Sports Union Hall of Fame in 2000.  The CSU website notes “Ellie joined Cambridge Sports Union in 1974 and had an immediate impact on the women’s running scene in greater Boston by being a top finisher in road, track and cross-country races”.  Her biggest accomplishment was to qualify (for Brazil) at the Los Angles Olympic Games where she ran in the first women’s marathon.  Eleonora is retired and currently living on Cape Cod.

Eric Blake is a 3-time winner of the race, taking the top spot in 2006, 2008, and 2013.  He owns the state record for CT (59:57) and NY (61:07) and is one of only eight people to have ever run under sixty minutes.  No one has run more times under 1:02 than Eric who has done so eight times.  Eric currently works as the head men’s and women’s Track & Field/Cross-Country coach at Central Connecticut State University.  He resides in West Hartford CT.  Eric notes that his most memorable moment at Mt Washington was his win and sub-60 minute effort in 2013.  “I had my wife and a lot of friends and family there watching so it was a pretty special day”.  Eric is still at the top of his game and “feel(s) I can run faster and still want a few more wins!”  Tops among Eric’s many accomplishments beyond the Mt Washington road race are his world record for a marathon on a treadmill (2:21) and being a scoring member of the 2010 USA Mountain running team which took home a silver medal at the World championships.

First ran at Mt Washington in 1988, winning the race and becoming the first person to run under 1:01 with a then course record of 1:00:50. He won again the following year in what is still the closest finish in the history of the race, beating Hall of Famer Bob Hodge by one second. He won for a third time in 1994 passing the early leaders in the second half as they succumb to the scorching heat. He currently holds the single-age (35) and 35-39 age group record with his 1:00:37 run in 1999. He also holds the single-age (24) and 20-24 age group record with his 1:01:50 from 1988. He holds the age 48 single-age record, 1:08:19 from 2012. He is one of only two men who own multiple state records, with his Massachusetts record of 1:00:37 and New Hampshire record of 1:00:44. He is ranked second in sub-1:02 finishes with four and is tied with Hall of Famer Keith Woodward with the most top 10 finishes (15). He has the most top 5 finishes in the history of the race with 15. He ranks third all-time in prize money winnings with $7,650. His 24 finishes at Mt Washington ranks 35th on the “most finishes” list. In 2006 he published “Only One Hill – A history of the Mt Washington road race” and is frequently referred to as the “Mt Washington Road Race Historian”. 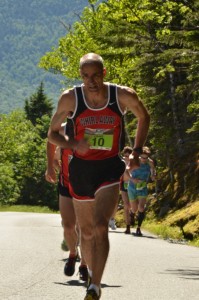 Jono first ran Mt. Washington in 2004, when he became the prohibitive favorite the moment he signed up. He had already won the World Mountain Trophy three times, was an Olympic marathoner, held course records in mountain races all across Europe, and was likely not merely to win at Mt. Washington but to break the course record. In fact he broke it by a minute and 40 seconds, running through damp fog and wind to reach the summit in 56:41, nearly seven minutes ahead of runner-up and U.S. national mountain champion Paul Low. Wyatt returned in 2007 and won again in 1:01:25, still well ahead of the field. He also won the World Mountain title three more times.

Bob ran the Mt. Washington Road Race eight times, beginning in 1966. He became the race’s director in 1982 and turned the race into one of the best-organized events in the sport. His name is familiar to countless Mt. Washington runners, as well as to race directors across the region and farther afield who use his company, Granite State Race Services, to provide timing and finish-line management to several road races on most weekends of the year. He set his own excellent personal best time (1:15:52) for the Mt. Washington Road Race in 1977.

Simon first came to Mt. Washington in 1998 and impressed everyone with a third-place finish. The following year he finished fifth — two minutes faster than in his debut. Certain he could win Mt. Washington, Gutierrez returned in 2002 and placed first in that year’s weather-shortened race, defeating the hardcore New Englanders as well as then course-record holder and Hall of Famer Daniel Kihara of Kenya. To prove he could win the race at its full distance, Gutierrez ran away from the field in 2003, then won for a third time in 2005. He is also the race’s fastest over-40 runner of all time, having broken Hall of Famer Matt Carpenter’s master’s record in 2008 by finishing fifth overall in 1:01:34, and holding six of the nine fastest master’s times ever recorded at Mt. Washington.

She first ran Mt. Washington in 1992 and set a new course record for women in one hour 11 minutes 45 seconds. Already the record-holder for the Pike’s Peak Ascent in Colorado, she came back to the Granite State in 1993 to defend her title as Queen of the Mountain and reached Mt. Washington’s 6288-foot summit seven minutes faster than her nearest challenger. She won again in her third Mt. Washington appearance, 1995, before an injury restricted her running and she turned to triathlons. Even so, she returned to Mt. Washington in 1998 and finished second only to Sweden’s Magdalena Thorsell, who broke the course record that year. Returning in 1999 at the age of 38, Day-Lucore placed fourth, and in 2001 here she was ninth woman overall, second in the master’s division behind only Olympian Joan Benoit Samuelson.